This is an introduction to the species of bat that can be seen in Greater London, where they can be seen, and some ideas on how to tell them apart. Species identification is often difficult, and some species can only be reliably identified by experts in the hand. Bat detectors are a valuable tool and can often reveal the presence of bats when they are difficult to see. Why not join the London Bat Group and come along to our bat walks to learn the “tricks of the trade”. 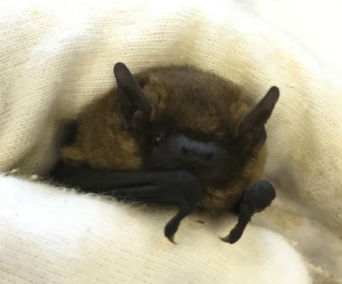 Identification: Our smallest bat with a weight of about 4-6 grams and a wingspan of 19-25cm, it is small enough to fit into a matchbox.  Fur is uniform brown and the face and ears are dark brown/black. Flight is fast and erratic with lots of twists and turns.

Habitat: Often seen feeding in woodland, parks, over water, along hedgerows and even over gardens in almost every part of London.

Food: Eats small flying insects such as midges and mosquitoes. Catches and eats its food on the wing.

Roost preference: Mostly roosts in houses, under eaves and soffit boards which means their roosts are found more often than other species.

Where to look: Common across Greater London.

Identification: Similar to common pipistrelle, but with a slightly bigger wingspan of 18-28cm. The facial skin is also paler. Flight is erratic with twists and turns.

Roost preference: Mostly roosts in houses, under eaves and soffit boards which means their roosts are found more often than other species. Can form large maternity roosts.

Where to look: Common across Greater London, especially around water bodies.

Identification: Slightly larger than common and soprano pipistrelle but still a small bat. Weighs 6-15 grams with a wingspan of 22-25 cm. Fur is shaggy and slightly paler on the belly. Flight is fast and direct.

Habitat: Found in woodland and around lakes and rivers.

Food: Feeds over the water on aquatic insects such as midges, caddis flies and lacewings. Uses aerial hawking to catch its prey.

Roost preference: Not much is known. If you think you have a Nathusius’ pipistrelle roost please get in contact.

Where to look: Can be found around large lakes. Richmond park is a good place to find Nathusius’ pipistrelle.

Identification: One of the largest bats found in Britain. It is often the first to emerge from its roost, sometimes before sunset. Weighing 18 to 40 grams, with a wingspan of 32 to 40cm, it has sleek golden fur and broad brown ears. Flight is fast and direct with steep dives.

Where to look: Good sites for seeing noctule are Hampstead Heath, Berwick ponds in Havering, over the Thames in Teddington, Oxleas Wood in Greenwich, and even in Hyde and Regents Park in central London.

Identification: Medium sized bat weighing 7 to 12 grams and with a wing span of 24 to 27cm. It was often called the water bat in the past because of its distinctive habit of flying level about 10cm above the surface of water bodies. 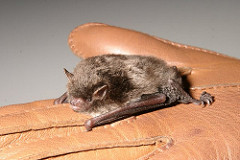 Food: Scoops small flies such as caddis flies and midges from the water’s surface using its tail membrane and feet.

Where to look: Can be seen mainly in west London sites like Wimbledon Common; the Grand Union Canal in Hillingdon and Bushey Park, but can also be found on sites like Hampstead Heath and Beech Hill Lake in Barnet.

Identification: Similar in weight to Daubenton’s bat but with a slightly larger wingspan of 24 to 30cm. Flight is slow and agile, often flies along vegetation. Can also hover.

Food: Can use their agile flight to glean spiders, harvestman, beetles and moths from vegetation.

Where to look: Have been found in Highgate Woods and the grounds of Chiswick House and in 1996 a tree roost was found in Hillingdon. Work is being planned by London Underground Ltd to enhance a major autumn site for this species that has recently been found near Highgate Wood. 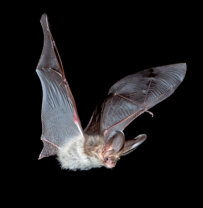 Identification: As the name suggests, the brown long-eared bat has remarkably large ears which are nearly as long as its body. It is a medium sized bat weighing 6 to 12 grams and has a wingspan of 23 to 28cm.

Food: Feeds on moths, flies and beetles. Prey is caught by gleaning off vegetation or by aerial hawking. Prey is often eaten at a feeding perch.

Roost preference: This is the bat that is most frequently found roosting inside roof spaces where it likes the ridge beams of older properties. Also found in bat boxes.

Where to look: A woodland specialist this bat can be found in and around woods. It can be a hard bat to find as it tends to emerge very late, keeping very close to trees when hunting and travelling.

Identification: Another large bat, weighing 15 to 35 grams and with a wing span of 32 to 38cm. Flies in broad circles around trees and open areas.

Food: Feeds on flies and moths but is particularly fond of cockchafer beetles which it can catch by landing on the ground.

Where to look: The serotine is mainly found in the outer boroughs of London such as Bromley, Havering and Sutton.

A number of other species of bat are occasionally found, especially in the outer London boroughs. The Leisler’s bat (Nyctalus leisleri) is a smaller cousin of the noctule and weighs 12 to 20 grams and has a wingspan of 26 to 32cm. A good place to see this bat is Battersea Park.  There is one known summer roost of Brandt’s bats (Myotis brandtii) in Hillingdon otherwise this bat is extremely rare in London, and for the similar whiskered bat (Myotis mystacinus) there are only occasional individual records.