In 2010 the London Bat Group began to think about how to best utilise the large database of bat records that had been gathered thanks to the hard work of an army of London Bat Group members over the years.  The Bat Group realised that raw database records in themselves are of little use without some sort of analysis. To be of use to those making decisions which affect bats in London (town planners, ecologists and land managers etc.), the data needed to be summarised in an easy to understand format. The solution – publish a London Bat Atlas.

In 2015 the atlas was published thanks to the tireless efforts of a number of London Bat Group members: Alison Fure (the project instigator), Richard Law (the atlas author) and Derek Coleman (the London Bat Group records officer) to name but a few.

The GiGL team were also instrumental to the project and were able to produce detailed distributed maps at 1km grid-square resolution. 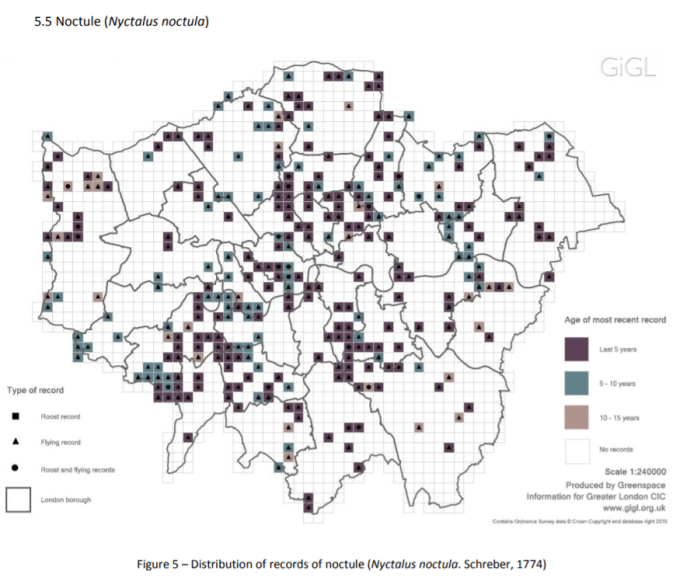 Visualising the bat records in this way has allowed us to understand how bats are using London more then ever before. Already the atlas has shown a few interesting trends. For example:

The London Bat Group hopes to use The Bat Atlas of London to galvanise support for bat conservation in the capital. Copies have been sent to all London authority planning departments and are available free-of-charge. We also hope to use the atlas to direct survey effort to areas of London where there are gaps in our knowledge of bat distribution and status.

A copy of The London Bat Atlas is available to download here.

Interactive versions of the Bat Atlas maps are also available to view here.